Skip to Main Content
It looks like you're using Internet Explorer 11 or older. This website works best with modern browsers such as the latest versions of Chrome, Firefox, Safari, and Edge. If you continue with this browser, you may see unexpected results.

Resources to inform and entertain to assist in celebrating Constitution Day Sept. 17.

On September 17, 1787, the Founding Fathers signed the most influential document in American history: the United States Constitution. This document established the framework of our government and the rights and freedoms that “We the People” enjoy today.

The Charters of Freedom 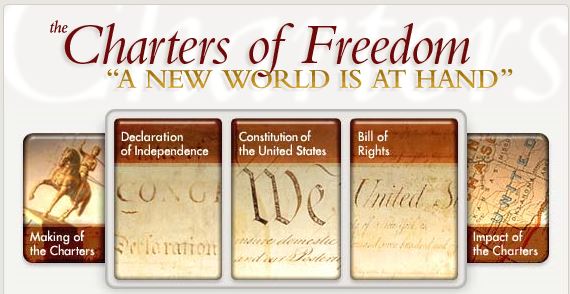 Constitution Day became a national observance in 2004, when Senator Robert Byrd passed a bill designating September 17 as the day for citizens to commemorate the signing of the U.S. Constitution and learn more about our founding document. Senator Byrd once said, "Our ideals of freedom, set forth and realized in our Constitution, are our greatest export to the world." He added the Constitution Day clause to his 2004 federal spending bill because he believed that all citizens should know about their rights as outlined in the Constitution. This clause mandates the teaching of the Constitution in schools that receive federal funds.

Constitution Day commemorates the formation and signing of the U.S. Constitution by thirty-nine brave men on September 17, 1787, recognizing all who, are born in the U.S.or by naturalization, have become citizens.

The Making of the Constitution

Eleven years after the Declaration of Independence announced the birth of the United States, the survival of the young country seemed in doubt. The War for Independence had been won, but economic depression, social unrest, interstate rivalries, and foreign intrigue appeared to be unraveling the fragile confederation. In early 1787, Congress called for a special convention of all the states to revise the Articles of Confederation. On September 17, 1787, after four months of secret meetings, the delegates to the Constitutional Convention emerged from their Philadelphia meetingroom with an entirely new plan of government–the U.S. Constitution–that they hoped would ensure the survival of the experiment they had launched in 1776.

Read about the varying backgrounds of our Founding Fathers.

Did you know about William Few, delegate representing Georgia?

"Following his success in politics, Few joined the House of Representative in the late 1770s. His political career rose when he was appointed as the representative of Georgia in Continental Congress in 1780 for six months. Few was sent home and assisted the reassembly of Georgia's dispersed government. Taken back to the parliament after this success, at the same time Few was asked to serve in Constitutional Convention in 1787 and in 1788 Few took part in the Georgia convention."